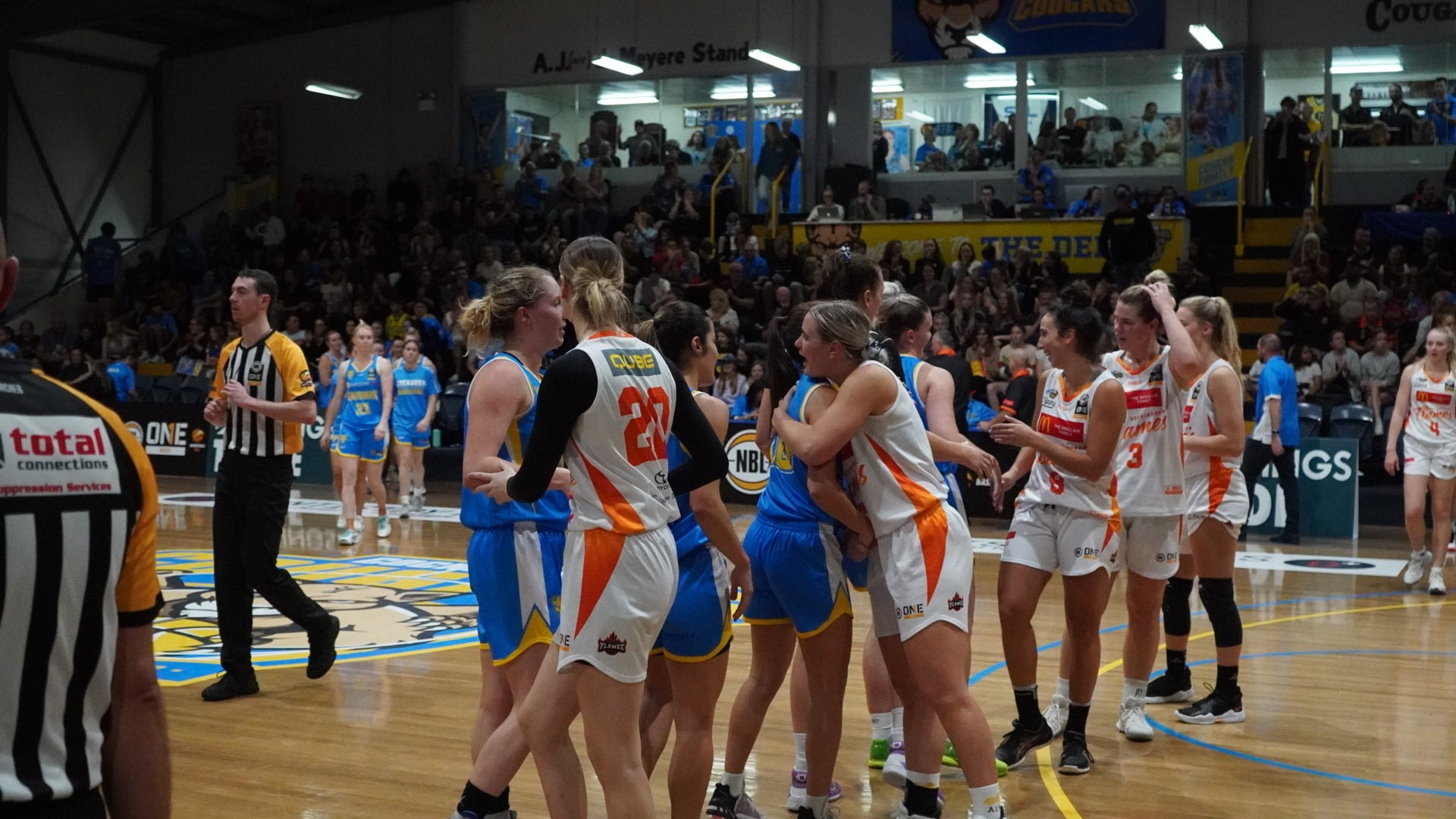 The Dentistry Plus Cougar Women opened NBL1 west breathing fire, with a hard-fought win over the Sinclair McDonalds Rockingham Flames 85-78.

The Cougars shared the ball well on the offensive end recording 24 assists and shot over 40 per-cent from the three point-line. They also won the rebounding count 41-38.

New recruit Molly Matthews also chipped in nicely with 16 points, with 12 coming from beyond the arc. Taylah Simmons had a solid all-round game with 9 points, 5 rebounds, and 5 assists.

The decisive factor for the Cougars was their scoring depth across the team, while the Flames relied on too much from only a few.

Tayah Burrows and Alexandra Ciabattoni played excellent for the Flames causing havoc for the Cougars defense combining for 54 points.

The Cougars had to adjust at the half-time break to combat an on-fire Burrows, limiting her scoring in the second half. However, Ciabattoni then started to shoot the lights out, finishing with 32 points, going five from nine from range.

The Cougars led 23-17 at the quarter time break, and then took an eight-point lead into the half after going on 18-6 run late in the second quarter to lead 48-40.

The Flames got the margin back to a point during the third term but the Cougars were still in front at the break by four. The Cougars stepped up their defense in the last term keeping the Flames to 11 points and taking away a first up win, 85-78.

The Cougars led at all three changes with the final margin of seven points giving the Cougars a confident start to their Inaugural NBL1 season, backed by a 580 strong home crowd at Wally Hagan Stadium.

The Cougars could improve on their 56% from the free-throw line, but have a lot of positives to take away from the first game of the season.

Head Coach Tyrone Thwaites was very happy with the effort of the whole team, and he said the team focused on getting a win in round one to begin the season and did exactly that.

“The girls were terrific tonight, and we spoke back in November that our number one goal was to get up and about, to get a win in round one,” he said.

“The most pleasing thing was we backed up our pre-season consistency – we had 12 girls who really wanted to perform tonight.”

The Dentistry Plus Cougar men battled in a tight contest with the Rockingham Flames, going down 72-86, and handing the visitors the inaugural Wave Cup.

The size of the flames was too much for the younger Cockburn side, as Rockingham dominated the paint and won the rebound count 48-38.

The Cougars could not make critical shots when it counted in the second half, allowing Rockingham to play on their terms.

Young bigs Nathan Pond and Daniel Rogers got in foul trouble with some questionable foul calls, but were outplayed by more experienced bodies from the Flames.

Boom recruit Nic Pozoglou played well in his first game for the Cougars picking up a double-double with 10 points and 11 rebounds.

The ever-reliable scoring machine Gavin Field had a good night for the Cougars with 28 points, leading all scorers, but the Flames had a more even spread of scorers with four players in double-digits.

Ryan Godfrey scored 23 points for the Flames, and Travis Durnin impacted the second-half finishing with 18 points.

Callum Beard was also productive with 17 points, Flames recruit Cirkook Riak scored 15 points as the visitors had more poise on the offensive end.

The Cougars started the game off superbly with a 10-2 run to begin the game and took a 21-16 lead into the quarter time break, but after that the Flames took control over the game.

The Flames took a 37-35 lead into the half-time break.

The Cougars stuck with the Flames in the third quarter, with just a seven point lead going into the last quarter.

The Cougars continued to stay with their opponents until a Ryan Godfrey three pointer put the Flames up by 10, eventually going on to win 86-72.

The youthful Cougars looked most exciting on the fast-break, when they got out and run, culminating in a couple of nice dunks from young gun Josh Hunt.

There were positive moments from the youth of the Cougars, but as the game progressed they couldn’t stop the experience of the Flames when it mattered most.

“In the first half we were really good defensively and just missed way too many opportunities offensively to keep ourselves ahead in the game,” acting head Coach Mark Clayden said.

“Their experience especially in the third quarter when the game was on the line was just too much, and we kept trying but unfortunately not making a shot at crucial times and then coming down and letting them score on easy baskets just cost us in the end.”