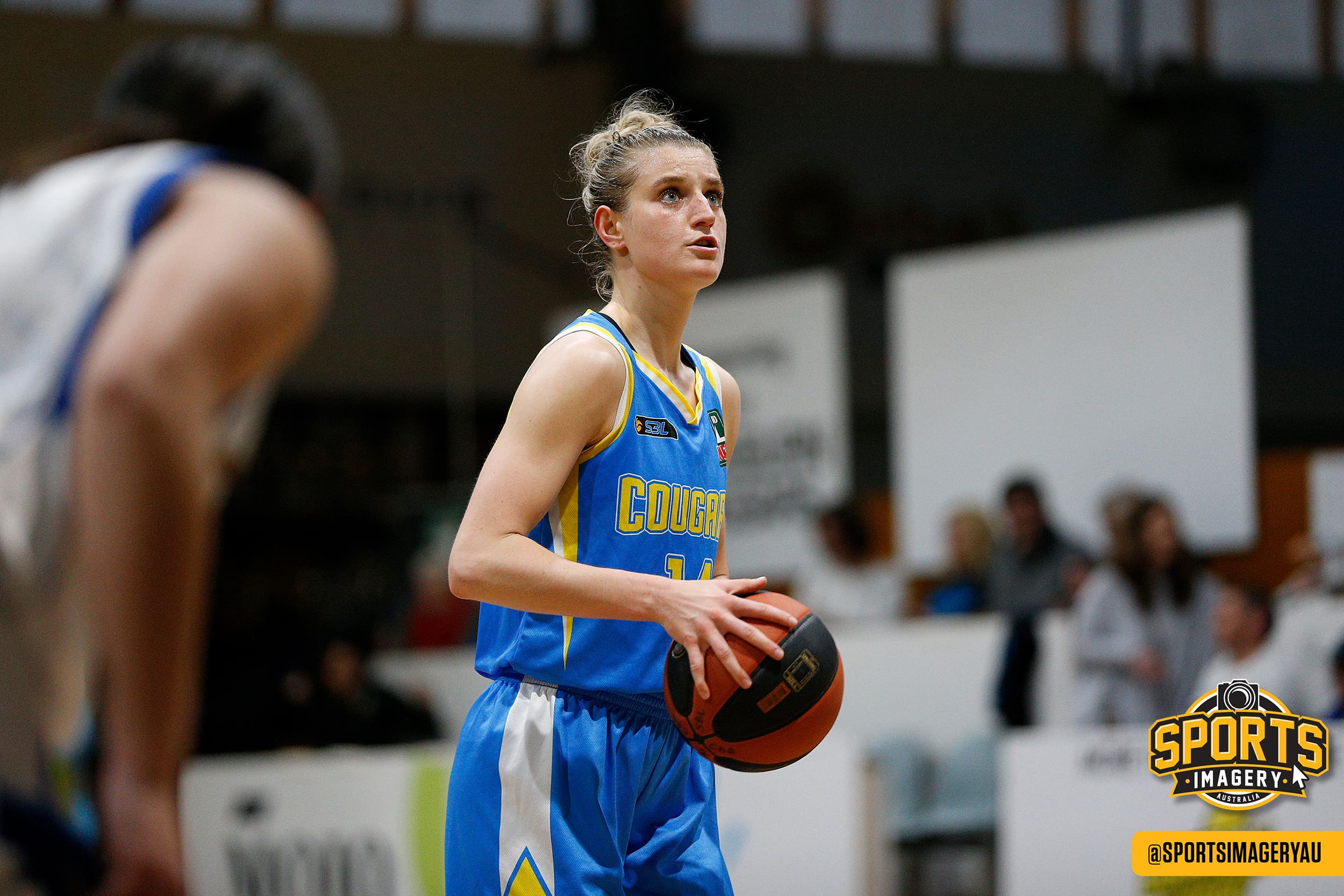 The Cockburn Cougars will welcome back a familiar face for the 2022 NBL1 West season with the return of Alina Hartmann who is keen to resume at the club having been expecting to do so before COVID happened.

The addition of Hartmann to the Cougars squad for the upcoming NBL1 West season is a significant coup for a youthful and emerging group under the coaching of Tyrone Thwaites who reached the semi finals in spectacular fashion last season.

Hartmann’s previous stint at Cockburn was back in the 2019 SBL season where she had a stunning impact upon her arrival mid-season. She finished up averaging 17.4 points and 10.2 rebounds a game.

Her last appearance saw her put up 29 points, 12 boards and three assists in the last game of that season against the East Perth Eagles highlighting just what she’s capable of.

Hartmann was committed to return to the Cougars for the 2020 season as well but the COVID-19 pandemic then struck meaning she was unable to get back to Australia.

However, what the German power forward has been doing in Spain the past two seasons is mighty impressive so she will return to the Cougars for this upcoming season ready for a significant impact, especially alongside Jessie Edwards in the front court.

The 26-year-old is excited to be preparing to return to the Cougars.

“In fact, I enjoyed it so much that I had resigned to return to play for Cockburn in 2020 but then the pandemic happened and didn’t allow for it to happen,” Hartmann said.

“I truly enjoyed living in Perth, the club, my teammates…I didn’t really expect this would be possible again any time soon. Even happier I am now that it is actually working out and that Tyrone still trusts me/wants me back on the team.”

Speaking of her coach at the Cougars, Thwaites is delighted to be able to bring Hartmann into the group both for what she brings on the court as well as to the club off the floor.

“Alina is someone we’ve seen firsthand, both as a person as an athlete. Particularly the human side, that’s normally a bit of an unknown for an international recruit,” Thwaites said.

“You do your due diligence but you never really know until they arrive. She’s great in that regard, so we know what we are getting.

“We wanted Alina back in 2020, re-signed her and then Covid hit which meant it just couldn’t happen. 2021 was much the same with the borders closed. The stars aligned this year and we can’t wait to have her here.

“She’s a stretchy 3/4. At 6’2 she’s a tough match up with the way she works in transition, shoots the three and cuts off the ball. In the pick and roll game she complements Jewel really well, so to have a pick and pop option (Alina) as well as a tough pick and roll option (Jessie), there’s some versatility and length we were missing last year.”

Hartmann has been playing impressively in Spain since her 2019 season at Cockburn. She’s currently playing with Innova-TSN Leganes who play in the top division in Spain so she will arrive back at the Cougars coming off some high-level basketball.

She has enjoyed the home away from home she has created in Spain the last couple of years in between also representing the German national team.

“My time in Spain has helped me immensely to grow as a player but also mentally/ as a person. Learning Spanish, which I speak fluently now, and adapting to the Spanish culture have been big challenges outside of basketball,” she said.

“Sports wise, the Spanish first division is one of the best ones in Europe and it was hard at first to establish myself there and required a lot of work/ patience.

“I surely put that work in though and especially during this current season I have created myself a solid role and I am able to add to my team’s success. Also the fact that I have been part of the German national team shows that my work had been acknowledged.

“This experience makes me a stronger, more competitive and more experienced player and I am very excited to transfer these things to Cockburn.”

When Hartmann reflects back to her first stint with the Cougars in 2019, it was her first time as a pro playing outside of Germany. She had spent a year in college at the University of Colorado Boulder, but it was a whole new experience for her.

She enjoyed it enough to want to come back, she learned plenty from it and now upon her return all she wants to do is make Cockburn as successful as possible.

“Last time it was mainly a big, exciting adventure for me and my first time playing outside of Germany (besides my year in college in the US),” Hartmann said.

“Accordingly, it wasn’t the end of the world for me that we ended up not playing a very successful season as I simply enjoyed being part of the team/ being able to have this experience.

“However, during my past three seasons in Spain, having to compete on a high level every day in training and during games, I have definitely grown as a player as well as a person.

“For that reason, I would call myself more competitive now and can’t wait to be out on the court for the Cougars and get A LOT more wins than last time.”

To say the Cougars are a different playing group that Hartmann will join now in 2022 is a great understatement as well.

Captain Nicole Roberts along with Haylee De Sousa and Kahlia Morgan are familiar faces, but for the most part it’s a new group and Hartmann is looking forward to becoming part of it.

“There are surely not as many familiar faces on the roster anymore, but it seems like a very energising and young group that’s full of potential,” she said.

“I can’t wait to get out there and meet everyone and hopefully build some great team chemistry to become a competitive team. I also have a lot of respect for the work Tyrone has put in during the past years on and off the court.

“He has really tried to make some positive changes and I think during the last season we could see first results also on the court.”

Hartmann wanted to return to the Cougars the past two seasons as well, but circumstances globally made it a no go.

However, she has kept on eye on things from afar, has been impressed with the leap to joining the national NBL1 West body and is excited to be part of the continued growth of both the Cougars and the competition.

“I have been trying to follow the league as best as I could and it truly seems like it is receiving a lot more attention,” Hartmann said.

“Especially in regards to women’s basketball it makes me very happy seeing the league/project grow (I’ve noticed the social media appearance is looking a lot more professional for instance). I am excited to be a part of this again very soon.”

While the basketball side of things with the Cougars is something Hartmann is excited about, she’d be lying if the lifestyle of coming back to live in Perth for a few months at least wasn’t a significant motivating factor.

Add that in with how it ties in nicely with her on-going studies and there’s so many reasons why it was a no-brainer for her to come on board.

“Obviously, most Europeans have it on their bucket list to travel to Australia at least once in their life. To actually live there for four months, playing the sports I love and automatically being in a group/team setup, seems like an absolute dream to me,” Hartmann said.

“I took a trip up north in 2019 after we had finished the season, my teammates took me to the south during a by weekend…and I will try to also travel and explore as much as I can this time. I’m mostly just thankful and excited for this opportunity.

“Also, I am currently getting my Masters in Global Challenges, which is a mix out of International Relations and Development/ Environment/ Global Health studies (online at the University of Edinburgh).

“It will be very beneficial living in Perth and being able to reflect on my studies from an Australian point of view. So in regards to all areas of my life I’m looking forward to being back in Perth.”