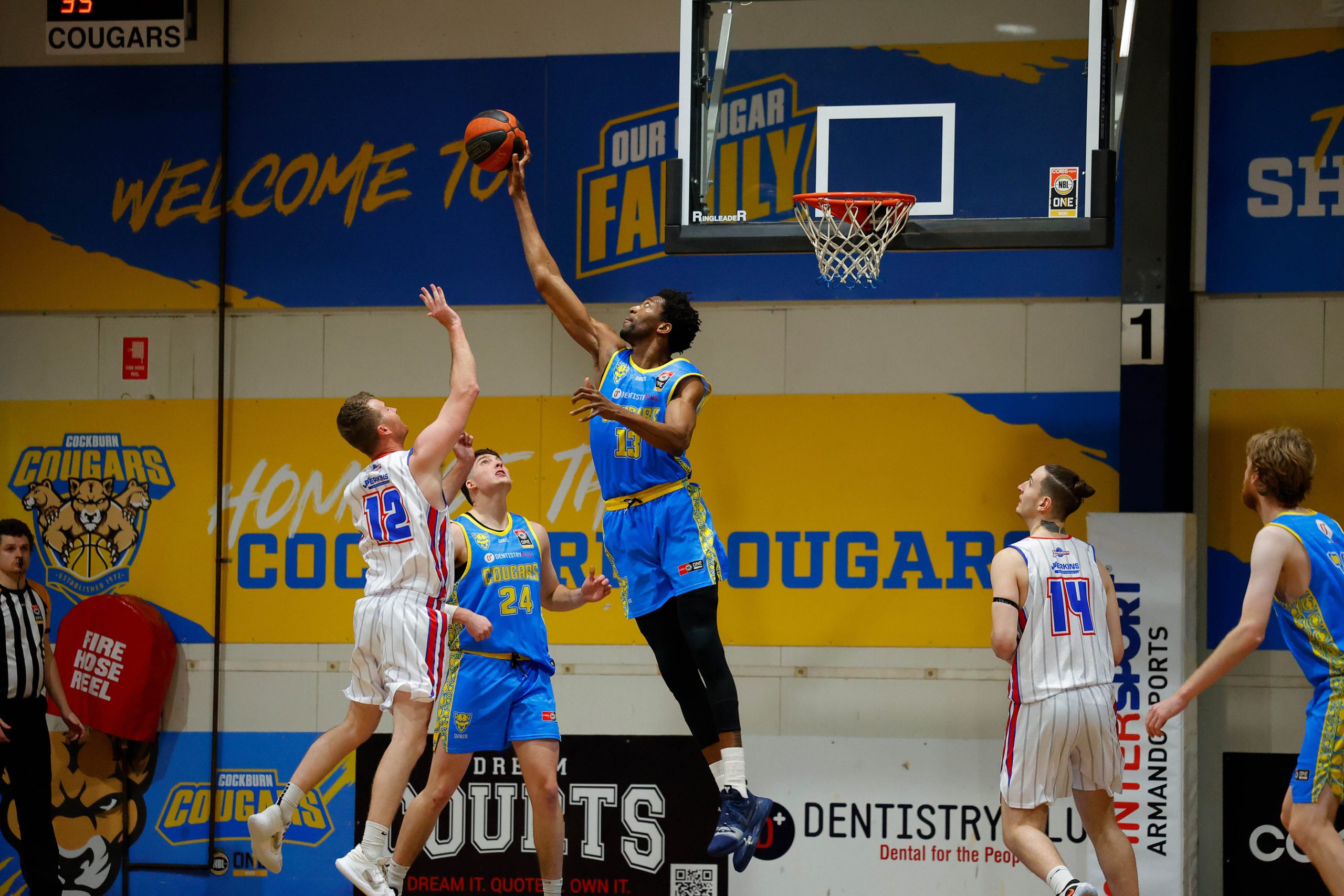 The Cockburn Cougars put on quite the offensive showcase in their Round 16 NBL1 West double-header scoring 232 points and hitting 38 three-pointers in wins over the Warwick Senators and South West Slammers.

The Cougars delivered two standout performances in the 108-89 and 124-105 wins against the Warwick Senators and South West Slammers to put themselves right in the mix still for a top four finish.

There was plenty to like in the two Round 16 victories with the Cougars combining for not only the 232 points across the two games, but shooting 87/162 overall, 38/81 from three-point land, collecting 90 rebounds, dishing out 55 assists and blocking 18 shots.

What the weekend meant was that the Cougars have now won three straight matches to improve to a 13-7 record to still be in sixth position but suddenly finishing in the top four is now a genuine possibility with two games to go.

The Joondalup Wolves are fourth at 14-5, the Goldfields Giants fourth at 14-6 and Warwick Senators fifth at 13-7 so there is the chance for the Cougars to finish above all of them if results fall their way and they beat the Giants away and Willetton Tigers at home themselves.

The Round 16 double-header for the Cougars began on Friday night and it was an entertaining opening from both teams with Kyle Zunic catching fire early for the Senators as he gears up for his first season with a full contract for the Perth Wildcats.

But with Carter Skaggs hitting four threes, and Paschal Chukwu a strong defensive presence, Cockburn led 30-28 after one.

The Cougars managed to stretch that lead out to 57-50 by half-time but the Senators were still close enough.

Cockburn dominated the third quarter with Josh Hunt finding the best shooting form from beyond the arc of his 64-game career across three clubs. With Skaggs continuing to be a threat, the Cougars put up 32 points to 15 in the third quarter and led 89-65 by three quarter-time.

Warwick might have won the last quarter but still the Cougars cruised to the impressive 108-89 victory.

Josh Hunt had the best game of his career to date for Cockburn finishing with 28 points, three rebounds and three assists on the back of shooting 4/7 from three-point land.

Cougars coach Andrew Cooper was delighted with the performance from his team against a tough opponent on their home floor.

“There’s no doubt about it, the boys turned up to play for sure. Certainly on the offensive end anyway,” Cooper said.

“There was a few challenges thrown out to some individual guys like Josh Hunt and Paschal. Obviously Josh ideas of a future potentially at the next level and what better way to do it against the quality players at Warwick in front Luke Brennan and I saw John Rillie floating around as well.

“Josh was great and so was Paschal against Majok. Without doubt he’s one of the best bigs in NBL1 so that was a good challenge for him, and no disrespect to Majok but I thought Paschal outplayed him.

Then on Saturday night, the Cougars did need to keep winning and it was quite the spectacle all evening between two high-octane and entertaining teams.

They combined for 57 points in the first quarter with the Slammers leading 29-28 at quarter-time.

The high-scoring continued in the second quarter but Cockburn really caught fire and exploded for 40 points while nailing 78 per cent from three-point land with Gavin Field unstoppable as they opened up a 68-57 half-time advantage.

The trend continued throughout the second half with another 36 points to 23 in the third quarter from the Cougars, and then despite the Slammers winning the last term 25 points to 20, Cockburn still won big 124-105.

The two teams combined for 229 points on the night with the Cougars shooting at a remarkable 57.0 per cent from the floor while hitting 17/34 from three-point land. The Slammers also went at 42.7 per cent overall and hit 10/27 from beyond the arc.

Gavin Field had another remarkable performance for Cockburn to add to the legacy of his 291-game career by hitting 10/12 from three-point land for 39 points, five rebounds, three assists, three steals and two blocked shots.

Cooper again liked a lot of what the Cougars did offensively especially the shooting outburst by Field, passing ability of Chan, talents of Hunt and then the defensive presence of Chukwu that wasn’t fully appreciated by those taking the stats.

“I do want to go on record as saying that Paschal had 11 blocks, I want to make that clear,” Cooper said.

“I watched the game back and I said to my who did the stats at Cockburn for a while and I said I won’t be happy if they missed any because he was so close to that triple-double that not many people get. But he was brilliant defensively.

“He protected the paint even though we gave up 57 in the first half which is not where we want even though we did nearly score 70 which was ridiculous. Gav was great and is shooting the ball really well, and in fairness to him he was found by Seva as many occasions as he could.

“To give some props to Carter as well who didn’t shoot the ball that well, he did make a few extra passes which sometimes he wouldn’t do. But he understood that Gav was the hot guy so let’s get him the ball. Josh had another good game and he had a brilliant game offensively. He’s picking his game up defensively and he’s really starting to turn himself into that completely.

“Offensively it was a great effort and defensively it wasn’t where we want to be, but in fairness to the Slammers, they have some talent. Buay Tuach is another level, he’s a very, very solid player and Caleb Van De Griend keeps doing things that you wouldn’t expect him to be able to do.

“But he has a work ethic that reminds me of Luke Jackson or someone like that who just gets it done. They have some potential to upset some teams over the last couple of weeks which would do us a favour, but I think Goffy has a lot to look forward to there if they can keep that group together.”