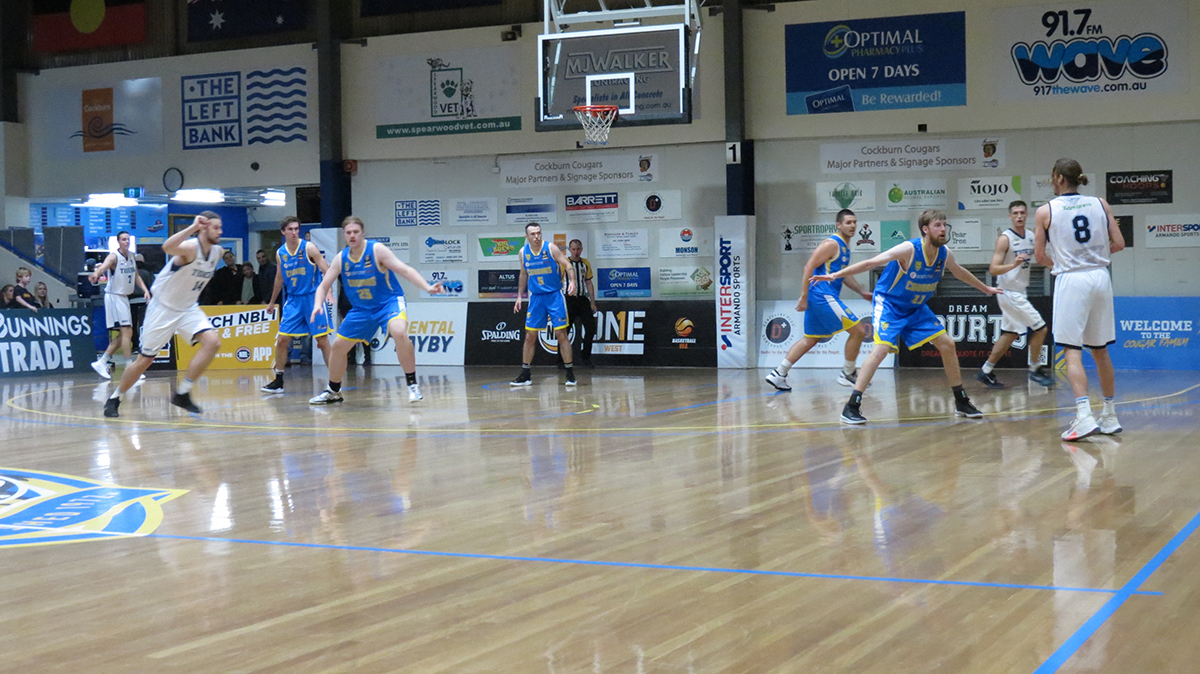 Dentistry Plus Cockburn Cougars vs Willeton Tiger’s – May 22

Taylah Simmons had her best game yet for the Cougars with 23 points, and Jessie Edwards was good despite having close attention.

Alex Sharp led the way for the Tigers with 20 points, and Samantha Lubcke had 18 points.

A three to Kahlia Morgan as the shot-clock buzzer expired before the first break tied the score at 16-16 provided a highlight for the Cougars Fans.

Taylah Simmons was lively for the Cougars setting the pace on offense with her ball-skills on display.

Jessie Edwards wasn’t as productive as usual in the first half but stepped up on defense throughout the night with 5 blocks.

The game was a see-sawing affair with defense on show, with points hard to come by with the score locked at 30 apiece.

The half-time score difference of two points showed the quality of the game with both teams playing with good intensity.

Jessie Edwards started to get going in the third term, and the cougars took the lead 40-38.

Molly Mathews hit a nice jumper in the corner to keep the Cougars going after the Tigers retook the lead.

A three to Desiree Kelley to put the Tigers up 55-46 heading into the last quarter.

Another three to Kelly put the Tigers up by 12, as the Cougars looked for some energy to reduce the margin and Nicole Roberts provided just that with superb defense.

A nice offensive-set got Kahlia Morgan a basket to get the margin back to 12.

A Simmons three followed by Jessie Edwards taking a charge gave the Cougars some momentum heading into crunch time.

The Cougars couldn’t get shots they wanted to as the Tigers proved too good for the gallant Cougars winning by 12 points.

Head Coach Ty Thwaites said the Cougars will rue their ill-discipline on defense as they were outclassed by a solid opponent.

“We didn’t shoot the ball particularly because we didn’t find ourselves with great looks that Willeton took away from us.”

Thwaites said getting Haylee De Sousa back would be a great addition for the huge match against Rockingham next weekend.

The Dentistry Plus Cockburn Cougars men have fallen short of the mark against the Willeton Tigers losing 88-94 in a tight arm-wrestle.

Gavin Field and Damien Scott went head-to-head in a fantastic exhibition of scoring power. Field finished with 38 points and Scott had 26 points.

The Cougars brought the momentum from last week’s back-to-back wins coming-out firing and hungry to prove themselves.

Three triples to Gavin Field set the rhythm for the Cougars on offense as their ball movement was smooth matching it with the Tigers.

The Cougars took a four-point lead into the quarter time break in a high-tempo game.

The Tigers dominated the offensive rebounds causing some trouble for the Cougars as they got valuable second chance points.

The Cougars threatened to break the game open as their defense turned into transition points, but the Tigers would not give in easily.

Nic Pozoglou showed his athleticism with several nice plays taking it hard to the basket, similarly Dan Rogers was tough inside with some nice put backs.

A Nathan Pond poster dunk got the excited Cougar family on their feet, providing the highlight of the game.

The Cougars took a two point lead after an entertaining first half.

The Tigers came out of the break on fire going on a 9-1 run. Connor Mincherton hit a pull-up three to extend the Tigers lead to beyond double-figures causing concern for the Cougars.

A Seva Chan three lifted the energy of the Cougars, followed by a triple from Gavin Field giving the Cougars some momentum.

cores for Josh Hunt and Gavin Field gave the Cougars a promising start to the last, but the Tigers responded strongly.

The Cougars continued to fight hard, and Nic Pozoglou was spoilt twice on two dunk attempts.

Gavin Field hit an important three and then Nic Pozoglou finally got his highlight dunk to cut the margin to five igniting a furious Cougars comeback.

However, the Tigers proved too good holding the Cougars fast-finish at bay as they won by eight points.

Head Coach Andrew Cooper said they let the Tigers get inside the paint too easily.

“Not protecting the paint on dribble penetration and letting them get to many shots around the basket,” he said.

“We had more shots, we outrebounded, we beat them in many categories and we just couldn’t execute, and they did which is a credit to them.”

The Cougars have a great opportunity to get back on the winners list against Rockingham next weekend.