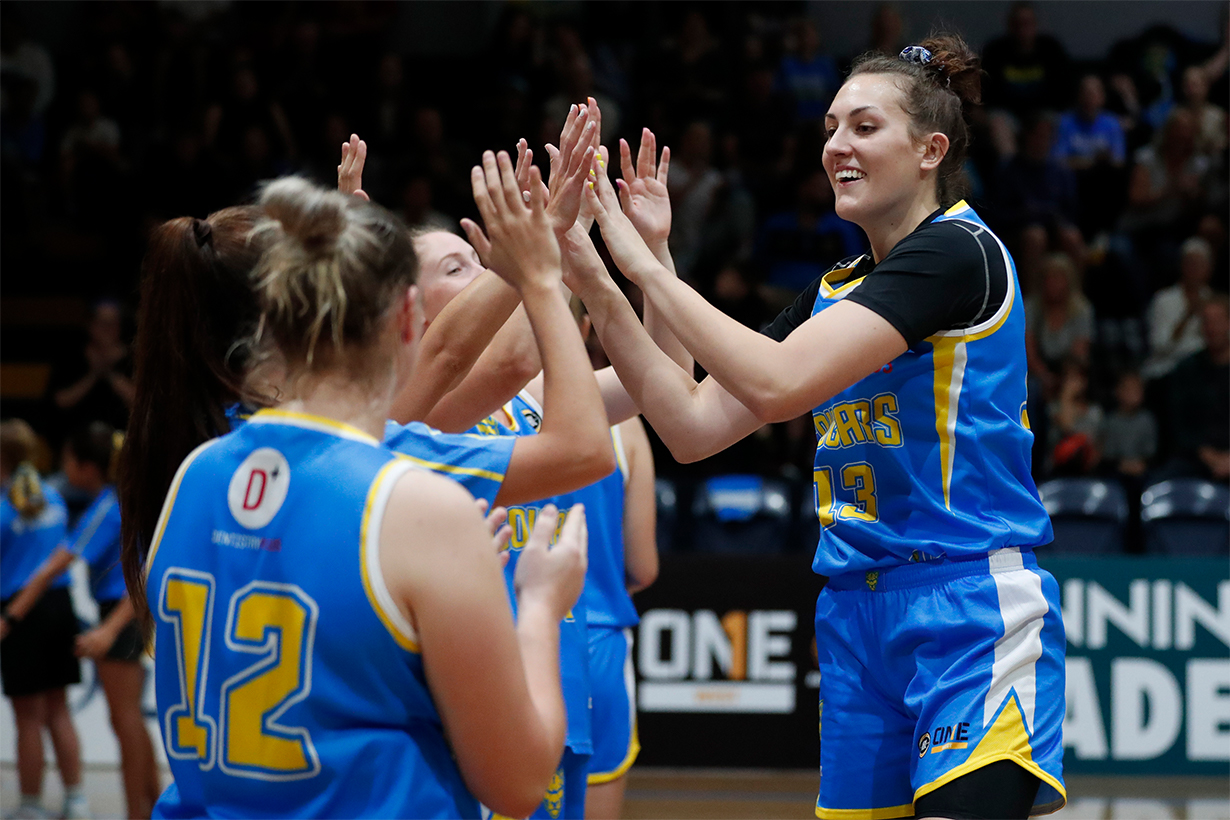 The Dentistry Plus Cockburn Cougars women won decisively against the Perth Redbacks, to go 2 from 2 for the weekend, continuing their strong start to the season.

Jessie Edwards was outstanding with 36 points and 12 rebounds, Taylah Simmons backed up a strong Friday night with a valuable 22 points, and Emma Burke was impactful off the bench with a quick fire seven points in 12 minutes.

The Cougars Women started the game with lots of energy coming off a Friday night win over the East Perth Eagles.

Jessie Edwards continued her dominance in the paint to help her team out to an 11-4 start.

The Redbacks worked a nice two player game with Mahkaila Dyer and Maddison Allen to keep within distance off the quick-starting Cougars.

The cougars took a six-point lead at quarter time up 26-20.

WNBL teammates Jessie Edwards and Maddison Allen had a fascinating battle going tit-for-tat, with Edwards taking getting the early wins in a battle of the centers, with 20 points in the first half.

She was strongly backed up by Taylah Simmons producing 13 points.

The Redbacks started to take control towards the end of the second quarter and levelled the scores with two minutes left in a tight contest.

The Redbacks took a one-point lead into the second half (46-45).

There was multiple lead-changes at the start of the third in a quality match with the first team to get a break in a good position to get the win.

The ball-movement was on show for the Cougars with a three to Nicole Roberts.

The Redbacks threatened to run away early in the third, but a three to Taylah Simmons and a nice post move to Jessie Edwards gave the lead back to the Cougars.

A terrific spin move by Emma Burke for a three point play gave the Cougars an eight point lead.

The Cougars were up 68-61 at three quarter time with the momentum heading into the last quarter.

The Cougars were well in control with the whole team playing well, but some late turnovers kept the Redbacks in the game.

A nice put-back to Jessie Edwards gave the Cougars some breathing space, but their defense stood up to pull off a hard-fought win.

The Cougars women have set their season up nicely after back-to-back wins this weekend.

Head Coach Tyrone Thwaites was very happy with the weekend after a terrific win over the Redbacks.

“After losing Hayley (De Sousa) to injury last night it was really good to rally a little bit,” he said.

“We’ve battled offensively the last two weeks, and it’s not perfect, but we started to execute tonight.

“We’ve said all year that our depth is just about as good as anybody, so we got tested this weekend, and our talent came through tonight.”

He was enthused about the contribution of the whole team in a very consistent performance.

“To get a broad spread of contributors tonight was great, obviously Jessie (Edwards) is a star, it was nice to see her do that against some one as good as Maddie (Allen).

“Emma burke was fantastic off the bench, she was just playing with confidence, I was incredibly proud of her,” he said.

The Dentistry Plus Cockburn Cougars men fought hard but fell to the Perth Redbacks by 17 points.

The first quarter went punch for punch in a physical contest as the Cougars had a renewed spirit after a disappointing result against the East Perth the night before.

Jaarod Holmes was a beast inside the paint to lead the Cougars scoring after the first quarter.

Tevin Jackson marshalled the offense for the Redbacks and proved a problem for the Cougars on offense.

The score was equal at 22 after the first quarter in a close contest.

Daniel Rogers was working hard on both ends of the court as he continues to gain confidence each week he is on the floor.

A Josh Hunt three got the margin back to one, but a couple of big baskets to Isaac Gattora-Hardgrave pushed the margin to five points.

Jaarod Holmes was strong inside having his best game for the season finishing with 22 points.

A Gavin Field floater kept the Cougars going but the Redbacks continued to find a way to get through the Cockburn defense.

A Seva Chan three in the corner leveled the score in the dying stages of the first half after a nice set-up.

Youngster Lachlan Bertram put the Redbacks up by two 48-46 at the half.

A Field three to bring the margin to one gave the Cougars some energy to lift them up, following up with some free-throws that gave them the lead.

Rogers continued to stand up getting crucial defensive rebounds on the Redbacks big man Louis Timms.

Points were hard to come by in the third, but Tevin Jackson hit a three to give the Redbacks a ten point lead at an important stage.

Jaarod Holmes kept grinding away inside with an offensive rebound and score giving the Cougars some fight.

A Zach Watkinson three kept the cougars alive with the Redbacks taking the lead 70-61 into the last quarter.

Two triples and a put back to Isaac Gattorna-Hargrave put the margin at 15 points as he led the Redbacks scoring for the match with 26 points.

The Redbacks hit shots when it counted and the Cougars defense led them down when it mattered most as they fell to the Redbacks without Nic Pozoglou.

Head Coach Andrew Cooper said they need to focus on the simple things.

“We just couldn’t score enough, and we went through patches where we couldn’t find a way to score, we missed easy baskets,” he said.

He is hoping Pozoglou will return to help the Cougars out on the offensive end.

“He will fix a few of our problems offensively and give a few of our other guys a bit more space, we’ll go back to training this week and we’ll get better,” he said.