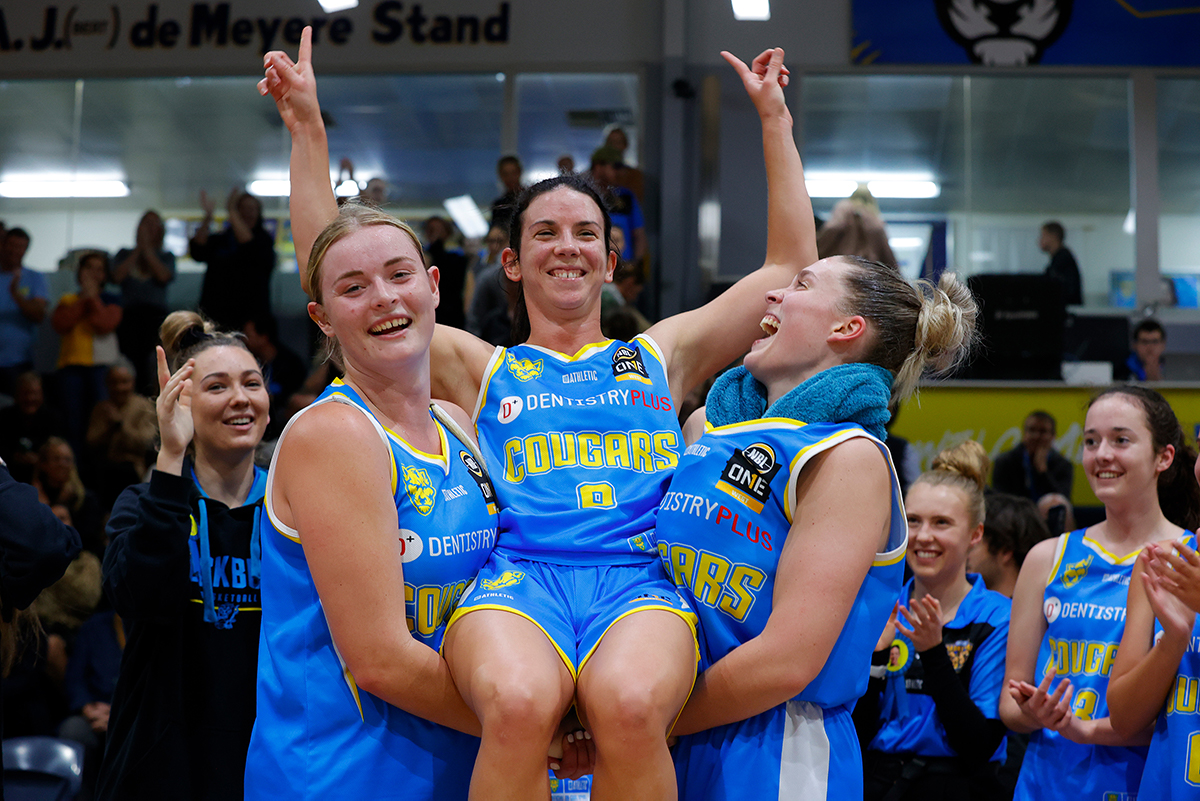 The Dentistry Plus Cockburn Cougars got the job done against the Mandurah Magic taking home the win 69-56.

The game was extra special as it was club legend Nicole Roberts 300th game, the first ever Cougar lady to that milestone.

Jessie Edwards was dominant again with 20 points and Taylah Simmons had 19 points as they steered the Cougars to a good win.

The Magic were well in for the fight hitting some tough shots with Carly Boag leading the way.

The Cougars had to earn it but some great passing got some scores on the board to settle their nerves in the opening minutes.

The Cougars took a one point lead, 23-22 into the first change against the Magic who were putting up a strong challenge.

Cockburn started to take control thanks to a terrific spin-move from Akim Lual, as Mandurah moved to a zone.

The Cougars took a five-point lead into the half.

The Magic were staying with the Cougars, but Taylah Simmons was superb driving through contact to pick up two and ones.

A nice corner three for Kahlia Morgan put the margin out the 12 as the Cougars started to lock down on defense.

Jessie Edwards started the fourth quarter with a tough and one to put the Cougars in a good position.

A three to Nicole Roberts finished the Cougars game in a fitting fashion as the Cougars won comfortably 69-54.

Milestone lady Nicole Roberts thanked all the people who have made her journey a memorable one across 17 seasons at Cockburn including family, friends, coaches and teammates.

“To my Family who are my biggest fans who have been there for the 17 seasons, and all the stuff before that, I couldn’t’ve done it without you guys, you support me so much, give me so much love, so I’m very, very grateful for you,” Roberts said.

Roberts said it had been a privilege to be able to play at Cockburn.

“It’s been enjoyable to grow up here, I’ve had a lot of support from a lot of people in the association,” she said.

She was grateful for the teammates that have helped her along the way.

“To my teammates this is why I play the game, I’ve made so many close friends, I enjoy every single one of the moments that we’ve had together, and I ive had fun for the last 17 years,” she said.

The Dentistry Plus Cockburn Cougars Men’s fought valiantly against the magic but fell in a tough game 91-78.

Zach Watkinson was a huge positive for the Cougars hitting five threes.

A nice hustle play from Nic Pozoglou set the tone for the Cougars as they came out with lots of energy.

Nic Pozoglou was relentless taking it to the basket at will and using his athleticism to score  neatly over defenders.

The Cougars looked lively on offense getting open shots as their offense was functioning well through good ball movement as the Cougars were up 23-19 at quarter time.

The defense was the focus for both teams as the score was locked at 28 with shots hard to come by.

Seva Chan was doing his thing in the paint weaving around defenders with a nice dish to Nathan Pond for a smooth finish.

Nathan Pond was stepping up and finished with a huge slam off a nice pick and roll action.

An important contested three to Gavin Field in the corner kept the Cougars offense going in a tight match.

The Magic were on top by seven at half time.

A huge backboard block for Nic Pozoglou got the Cougars fans excited and he followed up with a tough layup on the other end.

The magic started to pull away as Jerami Grace cut through the Cougars defense to put Mandurah up 54-39.

A much needed three to Jacob Polgase gave the Cougars some promise nearing three quarter time.

Nic Pozoglou got some dribble penetration and made a nice floater to give the Cougars a crack at three quarter time.

Zach Watkinson was shooting well from range keeping the Cougars in it with two quick threes to open the quarter.

Watkinson was a standout for the Cougars finishing with 17 points with five triples. Nic Pozoglou had a quality double-double for the Cougars with 19 points and 11 rebounds.

“Watto was awesome, we probably didn’t go to him enough in the end to be honest,” said Cooper.

Cooper said defense is paramount for the team to improve.

‘”We just gotta find ways to stop people from scoring and at the moment we can’t,” he said.