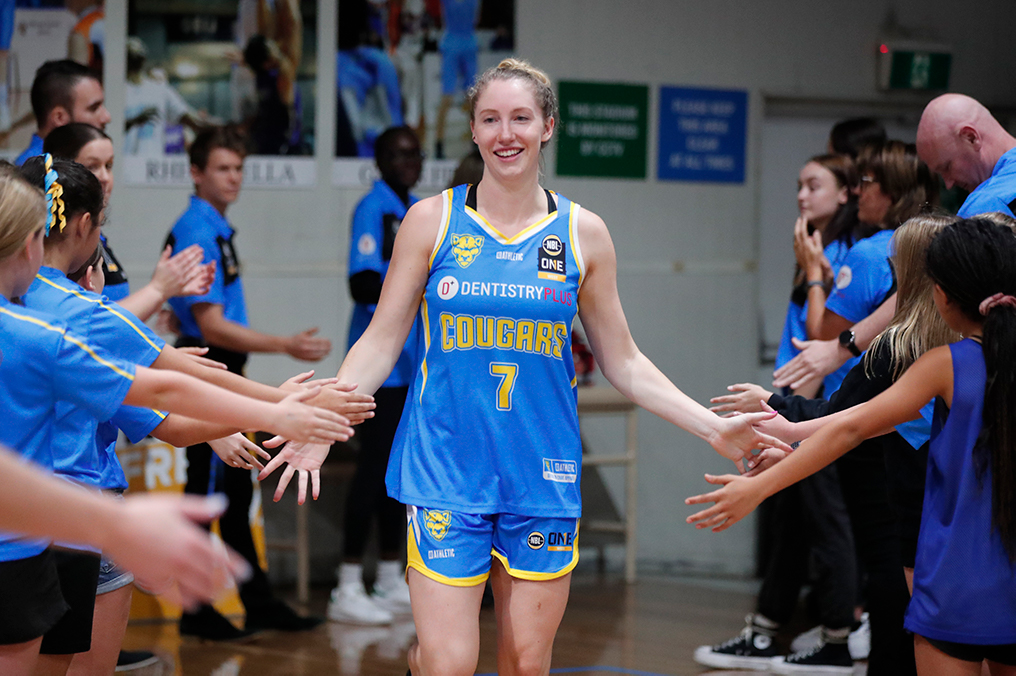 The Dentistry Plus Cockburn Cougars have won an important game 83-66 against the Lakeside Lightning.

Jesni Cooper set the tone for the Cougars with four triples in first half, finishing the game with 18 points and six triples.

Taylah Simmons was enormous putting up a triple-double, with 22 points 11 rebounds and 12 assists. Jessie Edwards also had a good night with 17 points

Ashleigh Isenbarger led the way for Lakeside with 17 points.

Jesni Cooper hit a three on the wing to open the Cougars account in the best possible fashion.

Lakeside came out in a zone opening up the floor for the shooters, which the Cougars took advantage off hitting five triples in the first to open up a 12-point lead at quarter time.

The Cougars continued were they left in the first with a third triple to Jesni Cooper to begin the second.

Lakeside brought the margin back to 10 but a nice finish to Taylah Simmons got the Cougars back on track.

The Cougars were on fire from three hitting eight threes giving them a seventeen-point buffer at half-time, 47-30.

Jessie Edwards fought hard on the offensive rebound to get a second-chance and she made it count with a strong and one play to start the third.

The Cougars kept their momentum going in the second half sharing the ball around.

Lakeside got the margin to under double-digits, but Cockburn steadied their defense through a few blocks to Molly Matthews.

The Cougars were up 60-50 at three quarter time.

Taylah Simmons got an important score to start the last quarter for the Cougars with energy.

A huge fifth triple to Jesni Cooper gave the Cougars some breathing space early the in the last.

The Cougars were able to get in the bonus and took advantage taking the lead out to fourteen.

Jesni Cooper hit her sixth triple in the corner making it very hard for the Lightning to draw back the margin.

The Cougars won the match comfortable in the end 81-64.

Head Coach Tyrone Thwaites was thrilled with the performance of the whole team.

“We had girls who stood up one through eleven,” he said.

“She (benn) took care of the ball tonight and was just our floor general,” Thwaites said.

“To also see Jesni Cooper really get reward for her effort since returning from College was just great.”

Thwaites said Taylah Simmons triple-double was a product of her hard-work.

“It is not the numbers that matter, it is her work ethic, particularly at the offensive end and pulling down those rebounds it makes a massive difference for us,” he said

Thwaites said the win could serve as a boost going into the latter part of the season.

“Last week we said the second half against Willeton was a confidence booster, even though we walked away with a loss, which is a rare thing to take confidence from,” he said

“We brought it this week, but we have work to do on the defensive end as it wasn’t where we wanted it to be tonight.

“But we needed to get a win that builds momentum for the last three games and into the playoffs.’’

Gavin Field had 19 points for the Cougars, and Nic Pozoglou had 13 points. Seva Chan was also strong with 12 points.

Rowan Mackenzie finished with 21 points and Jack Isenbarger had 14 points for Lakeside.

Nic Pozoglou got the Cougars off to a great start with a tough and one, followed by Seva Chan who found Josh Hunt under the bucket for a nice finish.

The Cougars got their fast break game going with Gavin Field finding Pozoglou for a nice passage of play.

Nic Pozoglou was playing very tough defense on scoring machine Rowan Mackenzie in an awesome matchup for fans to see.

Jaarod Holmes came in for the first time in the match and immediately asserted his authority with some strong takes to the basket.

Lakeside was just ahead but Cockburn were sticking around with tenacious defense causing some foul trouble for the big men.

Gavin Field hit his second triple to put the Cougars down by three 35-38.

Rowan Makenzie was providing troubles for the Cougars with points at the half.

Lakeside took a twelve-point advantage into the half, up 47-35.

Gavin Field hit all three of his free throws after getting fouled in the corner to open the second half.

Seva Chan took it hard to basket for a nice and one play to get the Cougars back on track.

Nic Pozoglou then got a huge drive and dunk that got the Cougars fans applause putting them back into the game.

In a highlight of the game Nic Pozoglou got two huge blocks in a row to deny Lakeside putting the Cougars fans on their feet.

The Cougars drew back to six points at three quarter time after a huge quarter.

Gavin Field banked in an important three for the Cougars to give them confidence to draw the margin back.

With the game going back and forth in the last three minutes any score would be important and Gavin Field came up with the goods.

The Cougars standing up when it mattered getting crucial stops to give the Cougars the lead for the first time since the first quarter.

With the Cougars down by three Josh Hunt had a three in the corner to tie the game but it rolled out.

“The second half was good defensively, but we obviously dug a hole up to half time, they’re a good team and they took us out of what we wanted to do they were just better tonight,” Cooper said

“We had our chances, we had open looks, we had our opportunities that we didn’t take, they were just better tonight and made tough shots when it counted and we didn’t,” he said.