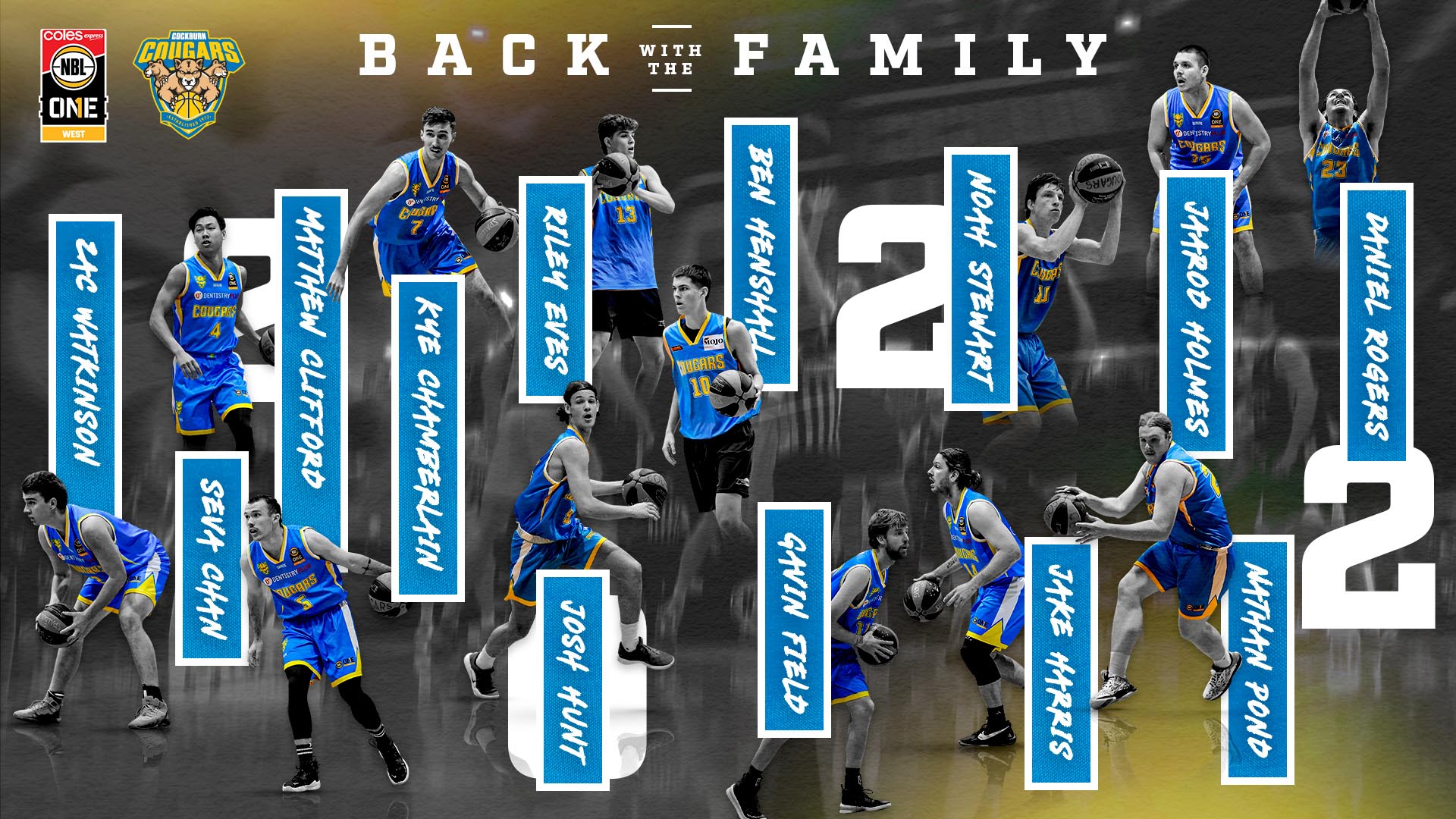 The Cockburn Cougars men finished the 2021 NBL1 West season on fire before a heartbreaking elimination final loss and now they are stocked up with impressive youthful and experienced local talent for 2022.

It was a rough start for the Cougars men to the NBL1 season in 2021 losing nine of the opening 11 games to see that playoff dream slipping away. However, they didn’t give up hope and strung some tremendous form together in the back end of the season.

After slipping to 2-9, the Cougars were able to string six wins together to put themselves back in the hunt before back-to-back losses to the Lakeside Lightning and Joondalup Wolves.

However, from there they didn’t lose again in the regular season with wins over the Geraldton Buccaneers, Perth Redbacks and South West Slammers enough to finish at 11-11 and secure a playoff spot.

It was then quite the grind out elimination battle with the Mandurah Magic that the Cougars lost in devastating fashion 63-62, but they will now be looking to build on what they did in 2022.

While reigning MVP Nic Pozoglou won’t be back and Ben Henshall and Alex Kovatchev are at the Basketball Australia Centre of Excellence, Cockburn has every reason to like the group coming together.

Coach Andrew Cooper has been happy with the improved conditioning of the squad this pre-season.

“We are still in pre-season mode at the moment and our pre-season has been good,” Cooper said.

“It has been a little bit different to the first couple of years that I was here and we’ve been a lot more focused on conditioning at the moment. The guys probably hate me for that but they are looking pretty fit and healthy. At this point in time we are progressing well I think.”

Zac Watkinson is a young player on the rise and Cooper is looking forward to him taking the next step with his game in 2022.

Watto is one of the local boys who are looking to make that next step this year and really try to establish themselves whether it be in the starting five or as a regular player. He’s been a very high-level D-League player in the past and he’s looking to advance his game past just being that three-point shooter and develop a few other aspects of his game.

Seva Chan is a championship winning 200-plus game veteran point guard now for the Cougars. Cooper likes the shape he is in this pre-season, but is also looking for him to step up his leadership this season.

“Seva’s looking good coming into this season. We are really expecting big things from him this year,” Cooper said.

“With the addition of a big man to our team as well giving us an elite big man, that really gives an opportunity for Seva to play pick-and-roll with a quality big. So he’s looking good and we are also looking for him to step up with a bit more leadership this year. That’s a goal for him.”

Speaking of point guards, Matthew Clifford is someone who Cooper will be looking to begin to push Chan in that point guard role as they share the one spot together.

“Cliff has been one of the leaders as far as pre-season has gone. He looks extremely fit, he has given us 100 per cent every time he walks out on the floor,” he added.

“He’s another one of the young guys that we are expecting to step up and continue to progress and keep pushing Seva for that starting point guard spot.”

Riley Eves is a rising star who could get his first chance at NBL1 level this year, but if it’s not this season, it’s only a matter of time according to Cooper.

Riley is one of my favourites, coming up from the under-18s. Riley is a future leader of the club, that’s how I see him anyway. He’s definitely got those attributes and he is still developing his game, but we’re looking forward to seeing him hopefully put his best foot forward to get a regular spot in the NBL1 squad. He’ll play a lot of D-League but we reckon he will be pushing for NBL1 as well.

Josh Hunt has found a home with the Cougars now having previously played with Geraldton and Mandurah, and is a player with all the natural tools in the world.

Cooper has no doubt he has the ability to play in the NBL if he reaches his potential, now it’s up to him how badly he wants it.

“Josh has had a slow start to pre-season and he’s been away for a bit, and had a few personal things,” he said.

“However, in the last couple of weeks he’s really stepped it up and with Poz leaving, there’s a huge opportunity for Josh to take hold of that two-guard or wing spot and progress his game to the next level.

“He’s got the attributes to play NBL but it’s now really up to him whether he wants to put the work in to get to that level.”

Gavin Field is the captain of the Cougars, he is the heart and soul of the club and there are no signs at all of him slowing down. Cooper is delighted to be able to coach, but also hopes that Field can help find his eventual replacement even though that could still be years away.

“He’s almost the same age as me so that’s one good things about coaching him, but Gav is Gav. That’s how we pretty much sum him up but what I have noticed with him over the last 18 months is that he’s really stepped up his vocal leadership side of things,” Cooper said.

“Apart from just doing Gav things, I’m expecting him to mentor a few of the young guys and take a few guys under his wing because as much as we are going to keep Gav around as long as we can, there will be a point in time when someone has to step up.

“It has to be that next Gavin Field that he can help to develop and we are looking from that next step from him on top of his normal basketball.”

Noah Stewart is the son of legendary coach Andy who is now making his own mark on West Australian basketball. Cooper is excited by the physical shape he’s got himself and can’t wait to see what he can do on the court now in 2022.

“If Noah’s not the strongest guy in the league physically pound for pound, I’d be surprised. This kid’s got a rig on him that’s for sure and he’s in the gym, lifting weights and putting a lot of effort in,” Cooper said.

“He was coming back off a knee injury as well last year and he has hit the ground running. He’s looking fit and ready to go, and I think from a defensive perspective, he can really offer us something which is where he excels at the moment.”

Jake Harris is another heart and soul type player for the Cougars, but it’s only his body that might stop him having a significant impact on the court this year according to his coach.

“Jake’s had some niggling knee issues over the last 12 months so he’s trying to find his way still a little bit back from that,” Cooper said.

“He’s had a bit of an interrupted pre-season but is starting to find out as well what life is really like when you get a full-time and can no longer just go to uni and play basketball.

“He is balancing that with his basketball now but hopefully if we can get him back to the level that he was 12 to 18 months ago, then he will offer us a lot again from the defensive side which is a big target for us to keep things under certain scores. He’s a big part of that.”

Jaarod Holmes has long been a powerhouse battling out of his weight division at SBL and NBL1 level and Cooper doesn’t necessarily want him to continue doing that.

He will spend more time at the three and four spots this year and Cooper has been happy with how he’s tackled learning a new role.

“Jaarod’s had a bit of a mixed pre-season fitness wise but the thing we’re looking for with Jaarod is for him to take on that leadership role, and to mentor the younger guys,” he said.

“With him being a little undersized as a big, we’re trying to develop his game so it can suit him better moving forward in the current style of where basketball’s heading. He is transitioning positions a bit but he’s been good at training with that. His leadership is always up there too.”

Speaking of big men, Nathan Pond has done a power of work to get himself in shape and with the natural gifts and size that he is, he has enormous potential and Cooper is looking forward to seeing his continued development.

“Pondy has been doing a fair bit of work with the Wildcats in the off-season. He’s a lot fitter as a result and as far as his fitness goes, we do a mile run every year for pre-season and he has knocked 40 seconds off last years’ time,” he said.

“He has dropped some kilos, he is keen and he wants to take that next step. He’s really pushing for being one of the premier big men going around in the next year or two. He’ll have some tough opposition this year with some good bigs coming into the year, but we are looking forward to him growing.”

Then there is Daniel Rogers who has the tools that could see him turn into an NBL player one day and Cooper is going to give him every opportunity to reach his potential.

“Dan is another one that when I sat down with him and asked what he wanted out of basketball he told me that he wants to play NBL. I told him that we would give him every opportunity to make that next step, but it comes down to what you want to do as a player and how much effort you put in,” Cooper said.

“He has been doing some extra work in the off-season and has been working with Andy Stewart. He’s hoping to make us better in that four man spot and even the five at different times because he has a skill set that can suit many different positions. That’s what we need to try and explore with him this year.”