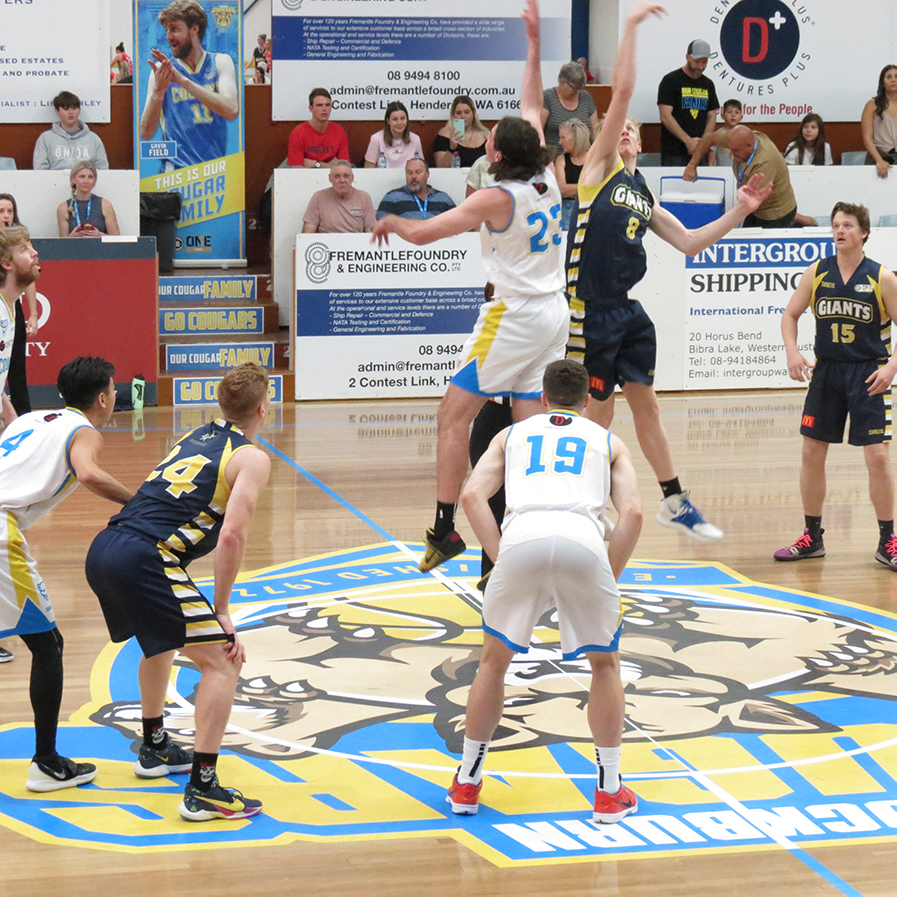 Dentistry plus Cockburn Cougar Ladies continued its promising start to the season with a comfortable win against the Eastern Suns 63-45.

Jessie Edwards had an immense influence on the game scoring more than a third of Cockburn’s points for the match, finishing with 25.

Taylah Simmons and Molly Matthews were also prominent with 15 points and 11 rebounds respectively.

It was a low-scoring affair with shooting well down but the pedigree of the Cougars was too much for the inexperienced Suns.

Jess Hickey suited up for the first time providing a glimpse of the future at Cockburn.

The Dentistry plus Cockburn Cougars Men won their first game of the season against the Eastern Suns 115-94 with six players in double-figures.

Gavin field had a good all-round showing, just missing out on a double-double with 22 points and nine rebounds.

Young star Josh Hunt was productive for the Cougars with 19 points and six rebounds.

Seva Chan, Jaarod Holmes and Nic Pozoglou all chipped in with 16 points showing the depth the Cougars possess. Pozoglou also had 12 rebounds giving him three double-doubles for the season.

Dentistry Plus Cockburn Cougar vs Goldfields Giants
Sunday 16, May

The Dentistry Plus Cockburn Cougars won a hard fought match against the Goldfields Giants 88-76.

Deng Kuany was a problem for the Cougars defense scoring several quality baskets and a powerful dunk to bring the Giants highlight of the game.

Julian Pesava reminded the Cougars of his scoring prowess with 26 points and Tom Atkinson chipped in 16 points.

The experience of Seva Chan and Gavin Field led the way for the Cougars on the offensive end. Nic Pozoglou impressed with a double-double, finishing with 24 points and 16 rebounds in his best game yet for the Cougars.

Seva Chan and Nathan Pond worked a nice pick-and-roll action on the offensive end to provide a highlight in the opening term.

The Giants took a two-point lead into the second quarter up 21-19.

Two three’s coming out of the quarter time break to Zachary Watkinson gave the Cougars some much needed-momentum into the second quarter.

A nice drive and behind the back move from Kye Chamberlain, followed by a hook was critical for the Cougars in wrestling back the momentum.

Cockburn took an eight point lead into the half time break up 44-36.

Some nice ball movement finishing with a Dan Rogers jumper opened the Cougars scoring account for the second half.

Damon Ballantyne hit a three to open the third, followed by a Julian Pesava three to level the scores.

Seva Chan took responsibility and set up Gavin Field for a jumper to regain the momentum, followed by a Jacob Polgase three.

Nic Pozoglou had two put backs impressing with his rebounding display and tenacity in the keyway.

The Cougars took a lead of nine points into the last quarter, leaving the door ajar in a fluctuating game.

Deng Kuany powerfully drove through the key and slammed it home to push the margin back to two points.

The Cougars came up with defensive stops when it mattered to win back-to-back games over the weekend and equal their record at 2-2.

Head Coach Andrew Cooper was pleased with the way the team performed and showed mental resolve in getting a hard-fought win.

“Defense was much better.”

The Cougars managed to keep the Giants below 80 points which was the goal heading into the game.

“Were pleased to win both games which gets us back to 2-2,” as the Cougars went two out of two for the weekend.

They will face cross-town rivals Willeton in what is shaping up to be an intriguing game next weekend.